100 years ago today a baby girl was born in Bolton.
The daughter of an Irish Tailor and a local lass, the manageress of the tripe shop. 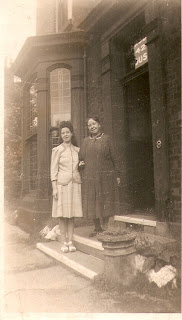 Eventually this bonny wee girl would become the big sister to a long line of siblings the second youngest of whom, Patricia would eventually become the Mother of a Kaftan wearing Hippy, who would eventually become the Grandmother of two boys with horrific south London accents who generally wear her daughter, often known as Nora, sometimes known as Jane to a frazzle.
Auntie Thora and Uncle Jimmy married late in life after the war and never had children of their own, but they had us.
And more importantly we had them. 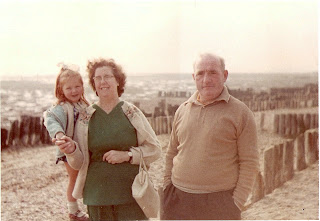 Two of the most wonderful and generous people with the largest hearts.
We spent every holiday with them when we were growing up. 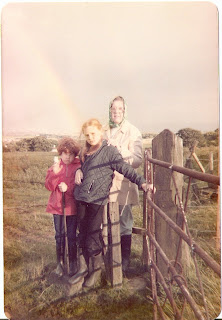 I can remember Mum saving coupons from the back of cereal packets when we were young so we could get cheap rail tickets to Manchester where we would be met by Auntie Thora and bundled on to the local train home.
We would leave the suitcases at the butchers and walk up through the field to the little white cottage up on high at the top of the village.
I'm not really sure why we left the suitcases at the butchers, except they were too heavy to carry all that way. Though I suspect its because with out my Aunt's patronage the Butcher would not have had a fancy foreign holiday every year.
Lets just say we ate a lot of meat when we stayed there.
The first time I took the Hippy to visit we arrived later that expected at 2.30 to a cold roast beef lunch, then at 5.30 we were served roast Lamb for our dinner.
This was a huge concession to the fact we had arrived late as dinner was always at 5 pm!
I'm not sure the Hippy ever recovered.
One morning he had to send me down to breakfast with out him to explain that no really he didn't want another huge cooked breakfast, really a cup of tea would be enough.
Auntie Thora's reply to that was "Humf, I bet if I asked him he would eat it!" 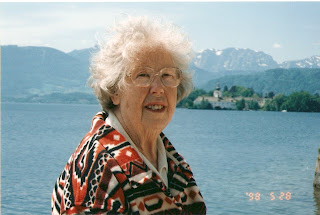 The amount you loved her was in direct proportion to the amount of her food you ate.
Every part of my life is filled with memories of Thora and Jimmy.
I think of them every day.
Even though they are both long gone now I always think of this as a very special family day.
Love Nora xx