Skip to main content
Labels
March 04, 2012
FORMER NUN'S SPEECH ALMOST SPARKED A RIOT.
So it would appear the picture of Edith O'Gorman the escaped nun's grave ignited not just my imagination in my post of this morning. 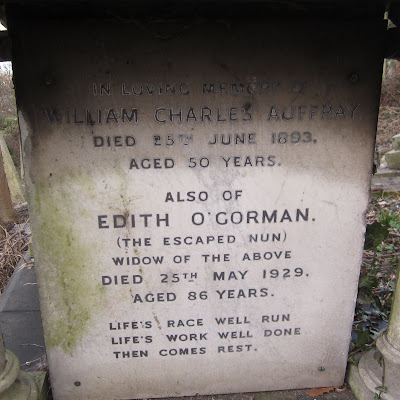 Thanks for all your messages about my trip to West Norwood cemetery.
My clever friend and glamourous assistant Kirsty sent me this link.
I've lifted the text of the article so you can read it here.
What an amazing story.
As they say you couldn't invent this stuff!
So sit back with a relaxing cup of tea and enjoy the mad bad and deffinatly dangerous to know story of the escaped nun. 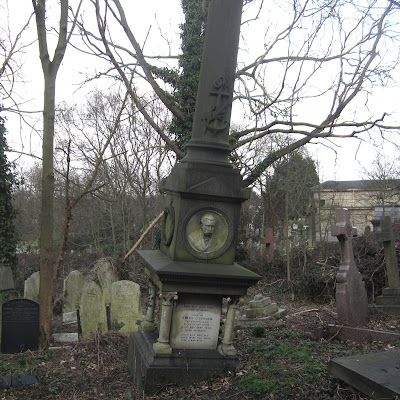 Friday, February 03, 2012Kent and Sussex CourierFollow
The secret lives of nuns have always sparked the public's imagination.
So the arrival in Tunbridge Wells in November 1889 of an "escapee" willing to spill the beans on the "horrors" of her experiences of convent life was bound to pull in the crowds.
​
outcry: St Augustine's, home to Victorian Tunbridge Wells's small but vociferous Roman Catholic population
• •
Edith O'Gorman, formerly Sister Teresa de Graftal, was already an international celebrity by the time she walked into The Pump Room in The Pantiles to speak about her "hell upon Earth".
She told stories of a Catholic priest who tried to rape her and the Mother Superior she said forced her to dig up worms and eat them as punishment for breaking her silence.
It was claimed more than 100 attempts had been made on her life by enraged Catholics, most recently when a bullet fired at the coach she was travelling in passed through her bonnet.
After a particularly fiery piece of anti-Catholic rhetoric, violent unrest had led to what would go down in Australian history as the Edith O'Gorman Riot. In Tunbridge Wells that night, there was very nearly another one.
The Reverend Campbell Strickland, vicar of Christ Church, was clearly a little on edge when he introduced his famous guest, who had left her convent in 1868 after six years there.
Described by one supporter as "the most hated and persecuted speaker against the Popish system", she evoked passionate feeling wherever she went. The Rev Strickland had already received a number of abusive letters and a paper attacking the former nun had been circulated in the town.
However, he stood firm, telling them that, as an Englishman and a Protestant minister, he would not be intimidated. To a mixture of hisses and cheers, he declared stoutly that he would leave Ms O'Gorman to speak for herself, adding: "Great is the truth and the truth will prevail."
Describing her experiences since joining the Sisters of Charity at a New York convent in 1862, the Irish speaker summoned up all the passion and drama for which her lectures were known. She told them she was supposed to be a Sister of Charity, "but there was no charity".
She added that she had never known a Roman Catholic priest who had ever given towards the relief of the poor, a remark that infuriated local supporters of the energetic Canon Joseph Searle of St Augustine's Church in Grosvenor Road.
One shouted: "It's a lie. The priest of Tunbridge Wells has."
Another yelled: "Stick to the truth, old gal."
Threatening to eject anyone making a noise, the Rev Strickland told them: "We are not going to be bellowed down by a lot of noisy ruffians," adding: "Policeman, remove that man and that woman."
A Courier reporter followed the clamour of dissent as it blasted back and forth across the room.
When Ms O'Gorman spoke of the soul, one voice shouted: "I don't think you've got one!"
Another replied: "No, but she's got a good old gizzard."
On the vow of chastity, she told them that young girls in convents were exposed to "the perils of loose morality" and warned them that if England were to return to Roman Catholicism it would be "farewell to liberty, to science and progress, to freedom of speech and press, and the glorious privileges your forefathers bled for".
The noise from a small but vociferous Catholic minority increased as the lecture went on.
At the end, a Mr Donovan stepped onto the platform shouting: "This lecture is false", before being pushed off by the Rev Strickland.
A group then attempted to rush the stage and "Matters looked rather serious until Sgt Forward and a police constable came to the rescue and, after some hustling about, cleared the room," noted the Courier.
For local Catholics living in a deeply Protestant town – the population of 61,000 included about 300 Catholics – Ms O'Gorman's unbridled attack on their beliefs was a deeply unwelcome reminder of the continuing hostility their religion aroused.
The appearance of a former nun with dramatic tales of rapacious priests and sadistic nuns was never going to pass peacefully.
Good eh?
Thanks Kirsty.
Love Nora xx
Email Post
Labels: escaped nun