Skip to main content
Labels
February 08, 2012
GETTING IN TOUCH WITH THE INNER CAVEMAN.
This post isn't really about me, its certainly not about my work.
Its about coincidences, obsessions, family and friendships.
I have told you before that I have a Mother.
And that Mother is not from the cake baking, jam making, housework doing mould of Mother.
Oh no she is of the kaftan and cow bell wearing, sod the house work lets eat in the garden and then spend the evening crayoning strange and interesting patterns on our bedroom walls mould of Mother.
My Mother also has a friend.
I think that that Friend should have had speech marks around it.
But Friend it is, Barry is I'm afraid a little too mature to be a "boy friend".
Mum and Barry met through a shared interest in prehistoric sites.
Well some say interest, others say obsession, others less charitable than I mutter the word lunacy, but I won't have that oh no no no.
I will not have it that the many many weekends I spent in my late teens and early twenties going on "field trips" to more or less every stone circle in southern Britain was based on lunacy.
No obsession is a much kinder word.
Though I'm sure in those days we these activities came under the catch all heading of "Earth Mysteries"
I do remember standing on a lot of very windy exposed hill grasping bent coat hangers being taught how to dowse ley lines.
But it is many many a long year since I picked up a set of dowsing rods.
Nowadays Ma's all about the prehistoric rock art.
They love it and spend every spare moment traveling the length and breadth of the country studying and cataloguing it.
And so when I saw this post by Karen Turner of Stitching life,
I knew just what to do.
Mum loved it.
Barry loved it.
End of story.
Or so I thought.
Little did I know Mum had a problem.
And Karen's work just kept on developing.
But before I disclose this problem and probably get to the point of this post I need you to travel back in time with me.
Can you feel the world going wibbly and fading slightly?
And here we are some where roughly 13000 years ago, slap bang in the middle of the Palaeolithic Age.
Some where out in the bad lands on the borders of Nottinghamshire and Derbyshire some one dressed in a bearskin rug is scratching away at the roof of a cave with a sharpened bit of rock.
They create this amazing picture of a bird. 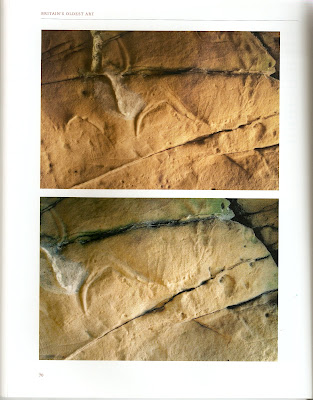 We are at what will become many thousands of years later known as Cresswell Crags, in fact we are in the Church Hole Cave.
These caves are in a gorge from the end of the last Ice Age.
It was here that your humble cave man dragged his wives by their hair during the summer months to observe the cull of the free roaming herds of prehistoric cattle.
Those charmers apparently did this by driving the poor beasties over the cliff and then having a high old celebratory feast on the remains.
Some of the caves were for living in, some where for the hyenas and some special ones were according to current theory for rituals and ceremonies, these are the ones with the rock art in them.
Personally I think this was more of a shopping list.
"Oi Ugg, will you stop it with the mashed up remains of the bison?
I'm sick of it, the kids are sick of it, your mum's sick of it, my Mum's sick of it.
I'm fed up with picking bone splinters out of the baby's mashed wildebeest at breakfast.
We want a change. We want some bird, and not one of your easy little birds either, sparrows are so last millennia.
I want a big plump bird.
Oh and not one of those nasty tasting long beaked ones. I want the fish eating one.
Got it?
Good.
And just so you don't forget I've scratched a picture of one next to your sleeping pit.
And so enough of my mangling of all modern scientific historic record,
the world is going wibbly and soft focus again.
But we are not quite home yet.
Just one quick stop off in 2003.
Back in Cresswell Crags (did we ever leave?) the hard working and harassed archaeologists were having their afternoon tea.
A well earned rest after a morning of big discoveries, lots of new rock art not least of which is a now familiar long beaked bird which these learned folk have interpreted as an Ibis.
Whilst their backs were turned a curator in a high vis vest sneaks a small group of fanatics, sorry interested amateurs in for a quick reckie.
Barry decided the archeologists were in fact wrong and this was no Ibis but rather a short beaked bird snaffling a fish for its lunch.
And so vaulted the protective barriers, scrambled up the scaffolding and quickly snapped this picture before the archeologists came back and gave him a detention for being a naughty boy. 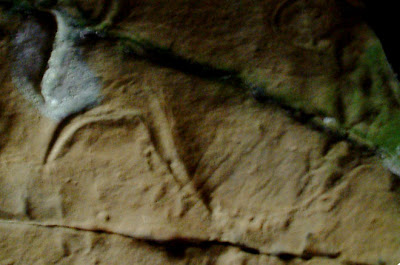 Who knows who is right and who is wrong. The real answer is lost to the mists of time.
Speaking of which its going wibbly again.
And so we are back.
Back to my Ma's problem.
Unbeknownst to me there was some frantic emailing going on between Ma and Karen.
"Could you?"
"I don't do commissions very often"
"Please"
"What if you don't like it?"
"I will"
"Ok well send me the picture and I'll see if inspiration strikes
By the way are you Nora's Mum?"
That stumped her! (Nora's not my real name)
And Oh boy did it! 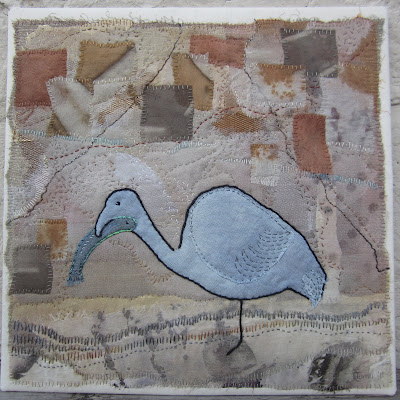 I took these pictures when Ma brought the bird to visit last month.
It was a freezing and gloomy day.
I'm not sure that it does justice to the depth of tone and colour Karen achieved.
But I didn't want to start fiddling with the picture in case I made it loose any of its intensity.
Obviously Karen goes against the thoughts of the trained professionals and agrees it is a short beaked bird with a fish in its beak. 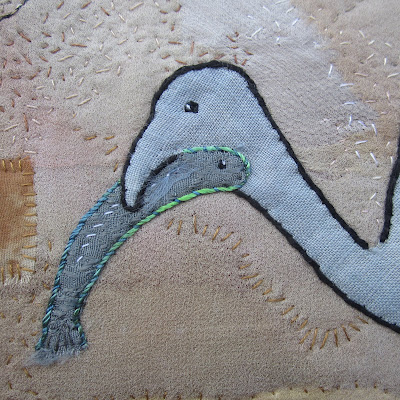 It bears up to very close scrutiny, look at the texture of the fish, the fin and the tail are beautiful.
And here is a close up of the cave wall. 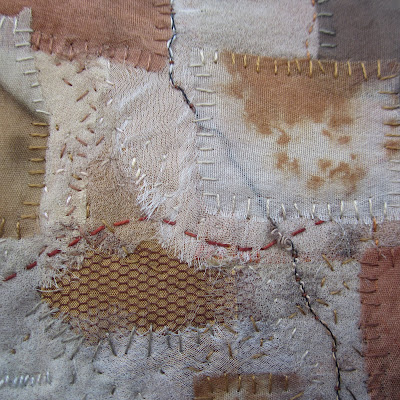