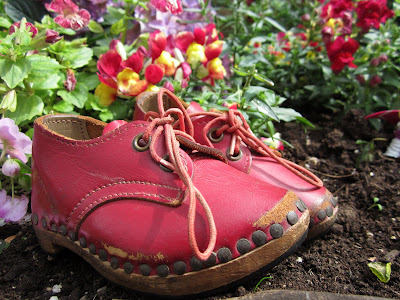 Inspired by this post from Lola
I realised I had a story to tell.
A long time ago a little girl was born.
She had a bearded Red headed jazz fan for a father and a Hippy with Lancastrian - African connections for a Mother.
Two of the most important people in all of their lives were Thora and Jimmy,
the hippy mother's aunt and uncle.
They lived in an ancient two up two down cottage with out door facilities up on the Lancashire moors.
It had walls two foot thick and always smelt of baking.
It had a series of Heath Robinson style out houses that Uncle Jimmy had built him self from bits of wood he scavenged and salvaged here, there and every where.
Most memorable of which was the glass house for his tomatoes made from
rotting old sash windows.
For our own safety us children were not allowed in there.
We would arrive by train in Manchester to a huge reception party consisting of various ageing Aunties, we would be bundled on to a smaller train to Bury and then on to a bus out to our village, Tottington.
When we arrived there we would leave our heavy suitcases at the butchers to be picked up by Uncle Jimmy on his way home from work.
Then came the long walk up the hill past the dungeon,
over the field and along the lane.
The cheery white cottage was always winking at us, inviting us in, always full of food and old ladies.
After a few days of roaming round the countryside and trips to the infamous Bury market, Mum would take a trip in to the village to see the cobbler.
He had a tiny little workshop behind what is now the Chinese takeaway.
I remember it being dark and dirty with a long work bench covered in tools,
but who knows how accurate this memory is as the last time I was there my nose wouldn't have even reached as high as the bench.
It was one of the last places in all of Lancashire to make
traditional wooden bottomed workman's clogs.
The very idea of it sung sweet music in the hippy Mother's ears.
My Brother and I had a new pair every year.
For many years now they have been transported about from loft to loft as part of my Mother's many moves.
At one point I liberated the smallest pair and have had them hanging
in my various abodes ever since.
When the Ginger Ninja was born there was some debate about wether or not he should wear them, but somehow it never transpired.
Now I'm thinking "what a shame" and "can you imagine the damage he would have done with those?" in equal measure.
Love Nora xxx
Email Post
Labels: family life