Skip to main content
Labels
June 08, 2011
8.6.11
The 8th June 1911 that is.
Somewhere in deepest darkest Liverpool Mrs Ogden went in to labour.
Before the day was out a new baby was screaming her head off after a timely
smack on the bottom.
And there we have her Mary Hutchinson Ogden.
My Grandma. 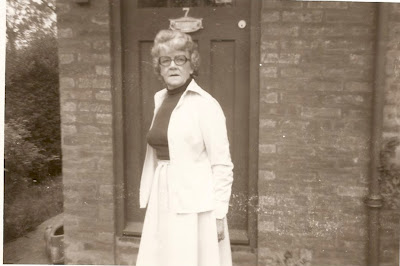 If she were alive today she would have been 100.
I think of her more or less every day.
I certainly quote her most days.
My best friend and mine's friendship has been defined by one of her pithy quotes.
One of 11, 6 girls Lilian, Ethel, Mary, Edith, Eleanor (Nell) and the unstoppable Elsie, and 5 boys, the twins Ron and Ralph, Ellis, Charles who tragically died aged 12 after a fall down the stairs whilst suffering from scarlet fever and a baby boy who sadly neither my old Dad or I can remember the name of who died in infancy.
In the early 1930's she met a young man called
Ted Grimshaw who took a bit of a shine to her.
In fact he pursued her all the way to Ireland where she was working.
He asked, she accepted and a terraced house back in Liverpool beckoned.
Four children later and my old Dad and his siblings were all terrorising the neighbourhood and sleeping in a chest of drawers when they ran out of bed space for all the many children during the many family parties.
She was a great knitter, and used to knit all our jumpers when we were little, but had to give up when her arthritis became too bad.
I am not a great knitter but I do enjoy it, so long as it isn't too complicated and means I can show off, hence all the yarn bombing.
Grandma was a show off too, always to be found holding court at any gathering of more than two people, she did so love to hog the lime light.
She was also a master of saying the inappropriate a little too loudly.
We all remember the "Bunny Darling Bunny"
said in a stage whisper that would have reached beyond the back of the stalls
when ever she passed a woman in a fur coat.
Or the "In some lights she could be almost beautiful"
when we were getting above ourselves and preening for too long in front of the mirror.
Or my absolute favourite whilst staying with my Aunt and Uncle she was sleeping in my cousin Rachel's bed room.
It was the Mid 1970's and Rachel was at a delicate age and obsessed with
the Osmonds.
At Dinner she announced loudly that she hadn't had to turn the light on when she went to bed the night before.
Really why?
Oh I got undressed in the light reflected off of the Osmonds teeth.
Que a sniggering table of adults and an upset girl of a delicate age.
Oh God this really is starting to look like my C.V!
She loved dressing up and putting on shows with us kids.
No really I must stop now!
To deflect from what is becoming a long list of the dubious qualities I have inherited
I thought I would show you these pictures. 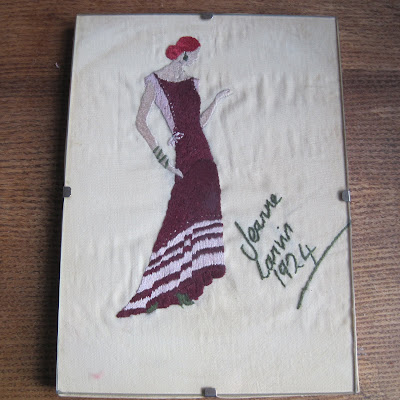 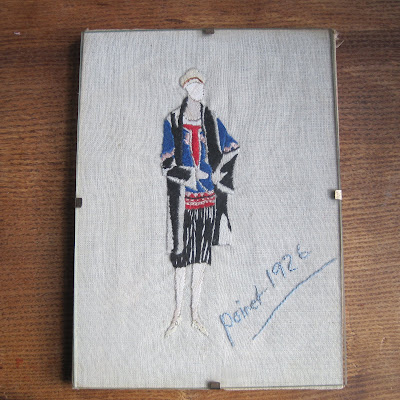 I made them when I was 18 as Christmas and Birthday presents for her. 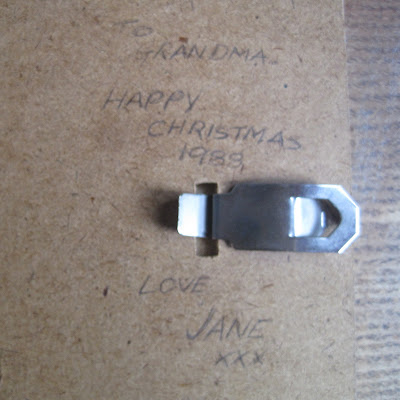 They have been on my wall for years now, my Uncle Don gave them to me after she died.
But looking at them closely now I am impressed by the detail I managed to stitch in to both pictures. 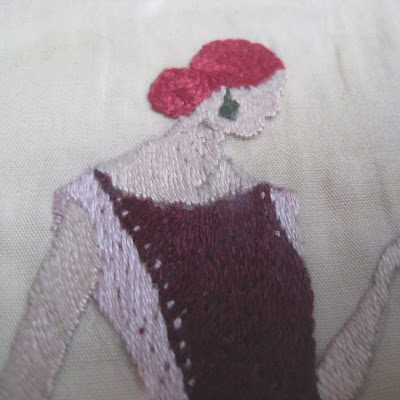 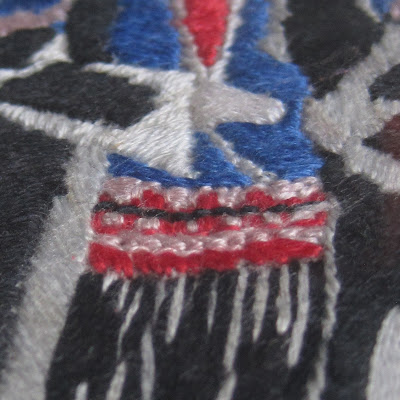