Skip to main content
Labels
December 08, 2010
WE SIX KINGS OF ORIENT ARE
OR THANK GOODNESS GRANDMA WAS A HIPPIE
OR THE NAUGHTIEST DONKEY IN TOWN.
a tale of many layers. 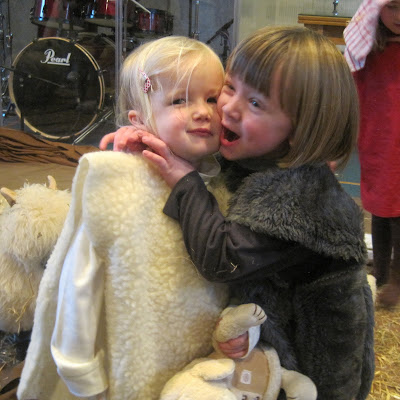 I knew what was coming, I had seen that look in a persons eye before.
And we are after all right slap bang in the middle of the nativity play season.
So it came as no surprise when the blond one's preschool teacher asked me to make not three as tradition dictates, but six wise men.
I was happy to hear that the Mary, the innkeepers wife and the approx 250 shepherds I made many years ago when the ginger one was there were still holding out and didn't need replacing.
And so we peel away the first layer of the story to see the second.
Which is that thank goodness Grandma was a hippie.
I was wondering what to make the tunics out of when my eye was caught by the bin bag full of stuff my Mum had brought over recently.
She has been moving from here to there and back again for years now, and so occasionally has a clear out.
And being the sentimental hoarder I am she is under strict instructions to run things by me before throwing them out.
Now in this bag was a collection of kaftan's going right back to the early 1970's.
A ha! thought I they would make the most perfect wise men ever. 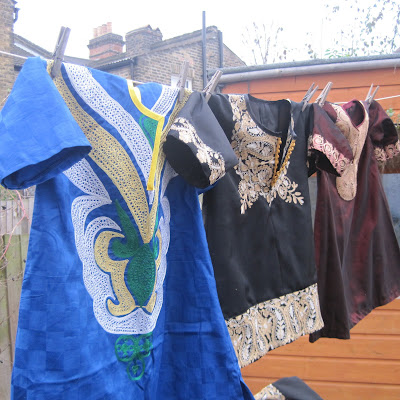 And so we need to peel away another layer and go back a little further in time, as these were no ordinary kaftan's, they were beautifully embroidered African kaftan's.
Why would a suburban housewife from Guildford have such items.
Guildford being so very very conservative, with both a small and a large c.
But this was no ordinary suburban housewife from Guildford.
You she she was only pretending to be from Guildford.
Really she was a barefoot, cow bell toting multi cultural Hippie, and before that a mini skirt wearing groovy chic supporting a bleach blond beehive upon her usually dark head, from Newcastle.
And before that she had come straight from deepest darkest Africa to the perpetual cold and drizzle of a Lancashire winter.
And so its time to peel back another layer, right back to the end of world war II, when my Grandfather newly demobbed and with a growing young family decided that the only way was up, and enrolled in night school. After much diligent study he procured him self a job in the colonial civil service and promptly upped sticks to live the ex-pat life near the Victoria falls.
He and my Grandmother managed to remain frightfully British, however their eldest daughter became African with a side order of British, much I suspect to their chagrin.
By the time she was 18 and her little sister 16 life in the colony's was not what it one was and in fact was becoming a little hairy in places, so the girls were dispatched home to stay with and Aunt and Uncle in the family heartland of Lancashire.
Eventually this Aunt and Uncle would become two of the most important people in all of our lives, but at that point, moving to a two up two down stone cottage in the moors with an outside privvie was a bit of a shock to those two exotic beauties.
And so its time for another layer to be peeled away.
Ma moved to Newcastle to study after a few years where she met another one of those people who was to become oh so very important in all of our lives.
Auntie Rose.
Not an Auntie in the English sense, but an African Auntie which trust me is a very different thing all together.
Auntie Rose was also a new comer to the north of England, coming all the way from Nigeria to study in the same college as Mum.
And so began a life long friendship that has lasted through the Biafran war, marriages, children, poverty, wealth, a purloined lawn mower and 1980's night clubs.
I have many memories from my childhood of the afore said Auntie arriving on our doorstep with mountains of cloth brought back from the home land. Lots of phone conversations where the mystical word "kaftan" was mentioned in awe struck reverential tones (see I managed to bring all the rambling back to the point eventually).
This would be followed by nights of Mum sticking sheets of newspaper together to make patterns for the mythical garment, quickly followed by more nights of frantic sewing, until after a few more excitable phone calls Auntie Rose would arrive with her perpetual gap toothed smile and exotic hair do's. There would be a lot of screeching and trying on of Kaftans before they went out in to the long hot night of a 1970's summer. 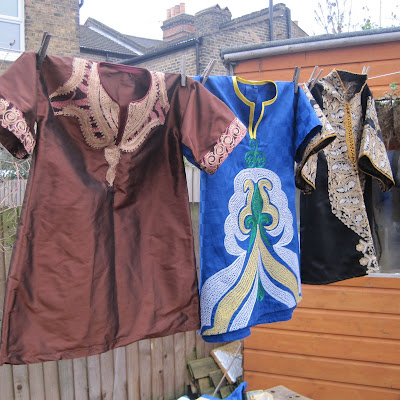 Fast forward thirty something odd years and there is that preschool teacher with that look in her eye.
So we peel away the final layer and find ourselves back at the beginning.
Yesterday at 1.30 we all gathered in the hush of the local church, even to an unbeliever like me its a lovely place to be.
The children filled in and sat on the benches. The blond one hadn't spotted us yet so he sat quietly admiring his warm and cozy donkey costume. 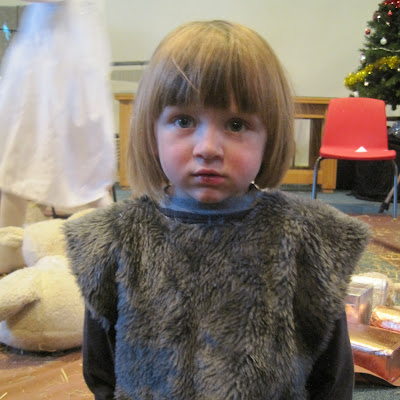 But then oh dear, he managed to spot us in the crowd, and that was it, he was off. Not for him the boring old gym benches. No no much more interesting was climbing along the backs of the chairs with his bottom in the people sitting in them's faces to sit on my knee.
Then he was off back to his teachers for a few moments and then he was back climbing along the backs of the chairs again. This went on through the introduction, reading and hark the herald angels.
But when Mary, Joseph, the inn keeper and the inn keepers wife arrived all bets were off.
Blondie realised that his calling was to dance in front of the crib, blocking the view of Mary, Joseph and most importantly the baby Jesus. 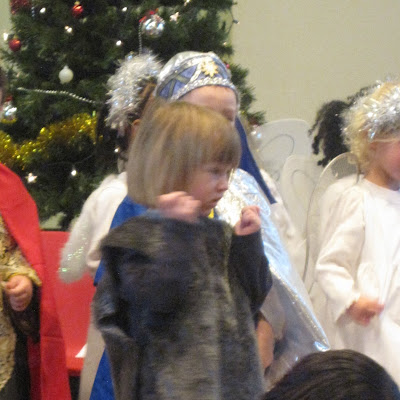 But then this too became boring and he enlisted the help of the inn keeper to pick up the straw from the floor and cover the baby Jesus with it, much to the agitation of a rather angelic looking Mary.
By this point I was trying not to laugh too loudly, but at the same time wondering
"why is it always my boys?" 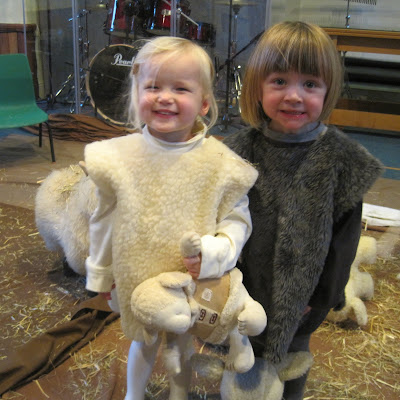