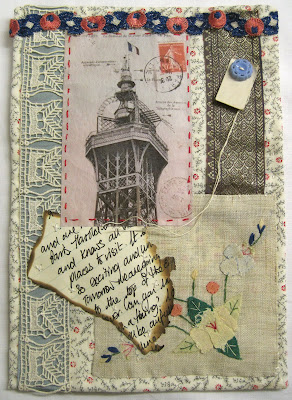 A singed fragment of a letter to an aged Aunt, a worn post card from Paris, a frayed handkerchief, a beautiful piece of wedding dress lace, the trim from a going away dress, the ribbon she wore in her hair the first time she met him and a button from a set she bought on their trip to Brighton.
Apart all these things seem seem like scraps, but put them together and you begin to unravel a touching story.
In the Spring of 1927 Kitty was 24 years old and single.
By August 1928 she was a newly wed on her way to Paris.
Kitty and Harold met in the summer of 1927 on the tennis court at a picnic
for a mutual friends birthday.
Kitty was wearing a lilac dress with matching ribbon in her hair.
Harold proposed four months later on a bright blustery day at the end of Brighton's west pier, after strolling along the sea front, some light shopping and eating ice cream whilst feeding scraps of bread to the gulls.
Much to the delight of both families Kitty accepted.
No one mentioned the age difference, after all Harold was frightfully rich and
Kitty was just so charming.
Kitty's Wedding dress was made by a
charming little company in the west end of London.
Pale blue silk with cream lace trim, it really was the absolute height of daring and the cutting edge of modern fashion.
It was such a shame that the hem was snagged on a nail at the reception, but then it gave Harold his lucky charm that he carried neatly folded in to his wallet for many years to come.
The next morning Kitty and Harold drove down to the newly expanded and refurbished Croydon Airport.
It was so new you could almost still smell the smell of paint drying.
Various friends and family came to wave them off on their flight to Paris.
Kitty was wearing a beautiful dress trimmed with some braid from the dress her mother wore as her going away outfit 30 years previously.
The happy couple waved to all their well wishers from the top of the stairs, just before she stepped in to the plane the wind caught Kitty's handkerchief and
blew it away on to the tarmac.
After two days of walking arm in arm along the seine, eating bearly cooked steaks, and looking round cathedrals Kitty sent postcards to her friends and a letter to her favourite aunt.
83 years later....
What story does the collage tell you?
Something very different to the one it told me no doubt.
But that is the point of something like this, there are hundreds of untold stories within it, just waiting to be discovered.
All pieces of art, be it by one of the great masters or even a slightly odd woman who works in a shed in south London have a story to tell.
All you need is to wake up your imagination and get playing.
So really this all a very round about way to tell you of an
exciting new class I am offering.
Hand stitched art collages.
Using pieces of vintage, repurposed and modern fabrics, pictures, paper, trims, beads, buttons, threads, ribbons and imagination
create an art collage with a story woven in to it.
On Thursday 3rd March 6.30 pm till 9 pm.
At Bermondsey Fayre
212 Bermondsey St, London, SE1
Cost £20
To book please e-mail bermondseyfayre@googlemail.com
Details of this and other upcoming workshops can be found
here.
Happy Valentines every one.
Love Nora xx
Email Post
Labels: love story workshops