Skip to main content
Labels
March 08, 2010
NORA DOES WORLD BOOK DAY.
At some point in the recent past my number one son,
the ginger ninja,
came home from school and informed me it was soon to be world book day
to which end he needed to dress up on Friday as a character from his favorite book.
Unfortunately this essential piece of information was filled amongst a growing pile of clutter in the ramshackle recesses of my mind.
So it was with a healthy amount of horror I realized at 9.30 pm on Thursday that I still had to make a zombie costume.
Drawing heavily on 20 odd years of experience in the costume world of London's glamorous west end I set to on a pile of old clothes with a cheese grater and a pile of felt pens. 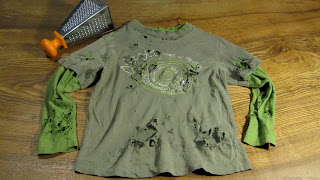 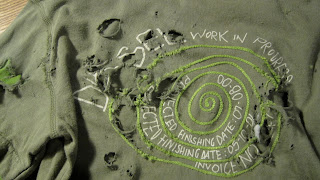 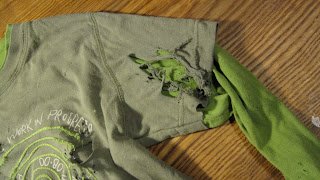 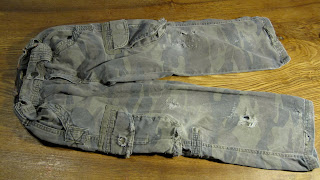 Not for nothing was I bottom of the class in printing and dying let me tell you.
The next hurdle was that as all self respecting mothers of boys should know
zombies have an unfortunate habit of shedding body parts as they wander around graveyards late at night.
Cue toilet rolls, the afore mentioned felt pens and a wing and a prayer. But no double sided sticky tape nor in fact sticky backed plastic. 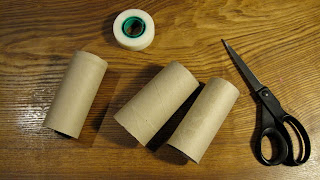 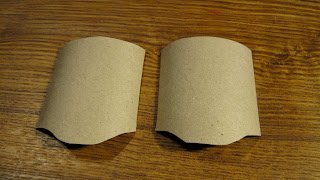 and fashioned them in to tubes. 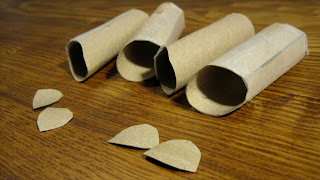 Then came the felt tip pen bit.
Thankfully the putty colour of the toilet rolls is the perfect zombie hue. 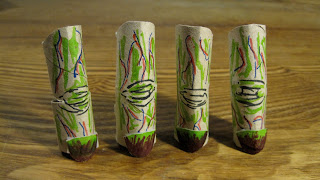 I learnt two important lessons that night
1. Listen properly when your children tell you important stuff.
2. I need to invest in some new felt tip pens for my boys.
The ginger ninja was happy with the end result, though my face painting skills need some polishing.
Make up was never a strong point, there was a reason I gave up on it at 18. 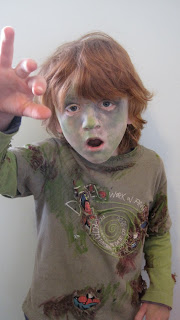 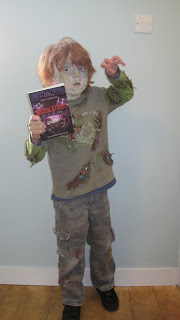 And then the tiny terror wanted to join in. 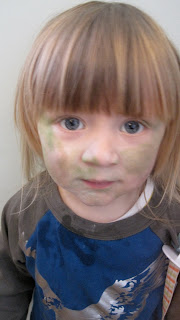 It looked sort of ok in the beginning,
but after a couple of hours it just looked like bad bruising.
Strange looks were thrown my way in Sainsburys.
World book day brought out the creative best of the children and parents of
Woodmansterne School, SW16. 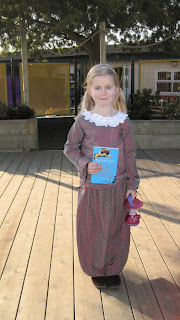 Olivia Yr 2 as Lucy from the Lion the witch and the wardrobe. 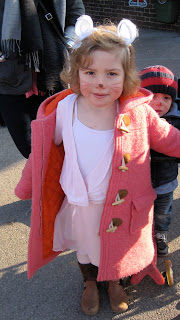 Polly Yr1 as Angelina Ballerina. Auntie Laura had like my good self laboured long and hard in to the night making those them there ears.
Thank God for the Auntie Laura's of this world. 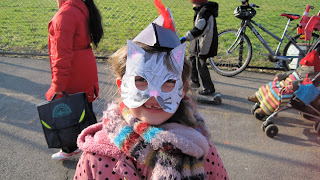 Sian Yr 2 as Puss in Boots. 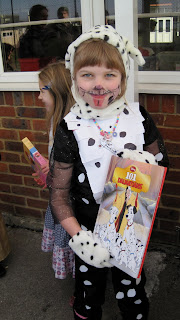 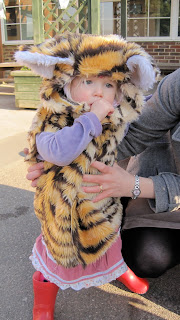 Jenna age 2 as a reluctant Tiger who came to tea. 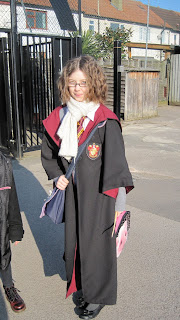 Kya Yr 6 as Hermione Granger.
Yet another mum had stayed up way too late with steam pouring from her sewing machine. 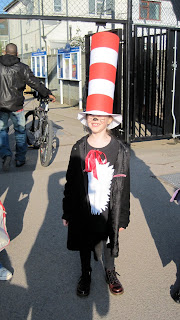 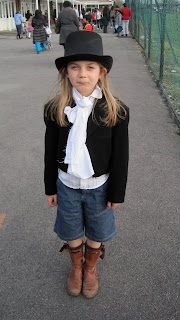 Florence yr 2 as the artful dodger. 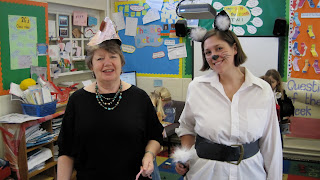 And finally Miss Gennoe and Mrs Scrivener Yr 2 teachers as Lauren Child's 'That pesky rat" and Puss in boots.. Just Love the tails.
I was asked for tips and help by so many worried parents in the run up to this event,
and yet the results were wonderful to see.
So much so that I am thinking of running a
"make costumes for your children out of not very much indeed"
workshop. Humm food for thought!
And finally if you were wondering just who the ginger ninja was supposed to be
it was Doug the surfer dude zombie from
Tommy Dombavand's "Scream Street" books. 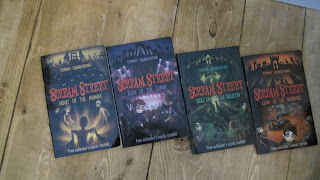