Skip to main content
Labels
October 13, 2011
MISS ME?
Remember me?
Hello I'm back.
Back from here there and every flipping where.
It feels like 3 months since I was last here, but I just looked it up and it was only
TWO WEEKS!
But wow did I fit in a lot in those 2 weeks.
13 costumes delivered to one west end show.
8 costumes cut and made ready for fittings.
A quick over night stay in Oslo to fit the afore mentioned costumes.
A few days teaching on the south coast and a rather interesting talk
to the yr. 5 pupils at the Ginger one's school.
A complicated homework for Ginger
that involved Winston Churchill, mummification and the ancient Egyptians.
Oh and packet lunches, school runs, washing and ignoring the cleaning,
ya ya ya!
So I thought what is best to do when having a bit of down time after all that rush?
Rather than doing what any one with half a brain would opt for, sitting staring at the wall whilst drinking tea, (to be honest there have been times this last couple of weeks when the thought of watching paint dry has been very pleasing)
I decided to enrol on a course. WHAT?
Whaty whaty what what?
Are you insane woman?
Actually I suspect so.
But I have been admiring Karen's work for a long time now.
Her embroideries always seem tell a story but apparently, or so she keeps telling me, I am always way off the mark.
One day I will tell you the tail of young Bess and her trip to the seaside as seen through the fair needle of Karen Ruane and slightly skewed mind of Flaming Nora.
Any way back to the point.
She has recently started running online classes.
Buttons and more is a quick trip in to the world of hand embellished buttons
(and more, but I don't know what the more is yet!)
It started on Monday and so far I haven't achieved a great deal
except to find out two important things.
1. I have been doing french knots wrong since I was a kid.
Blame Grandma she taught me.
2. I am now really over the whole french knot thing.
You can see the results of my frenchknotarama session at the top of the page.
I think I'm pleased with it.
I've had lots of really great comments over on Flickr.
But really its just a bit too, I don't know, grown up?
Unfunny?
Serious?
So I decided to make some teeny tiny halloween buttons. 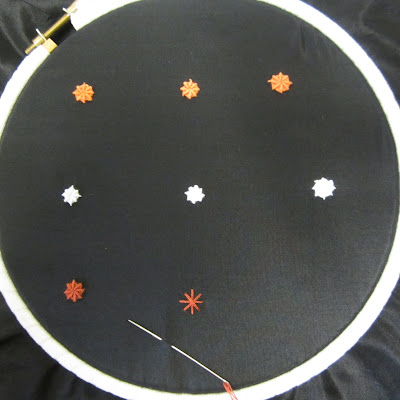 I haven't photographed them made up yet.
The Hippy has gone away for a few days and some how I am now in sole charge of two hungry and slightly grubby boys, so things are slipping.
I know you understand.
I was feeling pleased with the spooky web things, but then the Hippy said they looked like iced gem biscuits, so that was the end of that!
So then I decided I should really finish off (start) my friends Birthday present.
Its a little late.
Well very late, sort of March kind of late.
I can't show it all to you yet as I haven't given it to her. 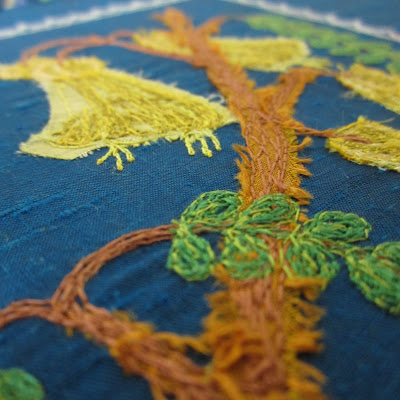