THE STORY SO FAR....PART THE FIRST.

And so it turns out I am not as good at being back here as I thought I was.

A week has gone by.
I left you all dangling mid air teased by the announcement of an announcement soon to be made.
I was amazed so many of you were still out there, still reading my rambling.
Still leaving heart warming comments.
Thank you all it mad me feel very loved.
Ya ya ya, what ever, cut to the quick you soppy old bag, people are waiting here you know.
I think the reasons I stopped blogging can be left for another day. I'm not totally sure I understand them my self.
But I was waiting for something to come along that was important enough for me to start writing again.
Although part of the reason I stopped blogging was because I became so involved in what I'm about to talk about.
Told you it was complicated didn't I?
It all started in August.
After becoming increasingly upset about the refugee situation in Calais I had a conversation with my Mum. The conclusion of which was, while it is a lot of money, I could easily afford to spend £50 on aid to Calais and it would not leave me destitute. It would may be mean a few less treats for the boys that month, or no new clothes for me, or missing out on a family trip to the cinema. But £50 could if spent well make a huge difference to people with nothing.
Next came a meal out with friends where the same conversation was had and more importantly a decision was reached. We would all put in what we thought we could afford and find a way to get aid out to Calais.
Things spiralled.
I met likeminded people on Facebook, we met an amazing woman who was going out to Calais as a volunteer to help in "the jungle".
I went shopping. Others collected blankets, sleeping bags, warm clothing and food.
My Mum and her partner, Barry,  donated £100 that we spent on tarpaulins.
All the while the crisis is becoming worse hundreds of thousands of people are fleeing war and persecution and making their way to the safety of Europe.
We realised we needed an easier way to communicate, we set up a Facebook group.
Hastings supports refugees, with the idea that the few of us could communicate more easily.
4 months later we have well over 1000 members.
We have sent a huge shipment of children's clothing packs and shoes to the Greek Island of Leros.
We send clothing, firewood, blankets, sleeping bags regularly out to Calais.
We have helped to fund volunteers to go to Calais.
We have raised money for volunteers to spend on aid in Lesbos, Greece.
We have raised enough money for UNHCR accredited shelters to house refugees.
We have donated money to the Humming bird project for shelter building.
We are helping fund projects working directly with unaccompanied minors in Calais.
The list goes on and on.
The fund raising goes on and on.
We are a small team of admin who run our group and we are trying ever more inventive ways of raising the money to help.
We have to fall back on our strengths.
Mine is sewing.
But what to do.
I can hardly embroider the world back together.
The cracks are too big to be darned.
Or are they?
Together with Anna Winston of La La Rookh I decided to do a bit of sewing for the greater good.
And so the "Bird in the Hand Project" was born.
Making little hand sized birds for the hands of little refugees.
Birds are often seen as symbols of hope and peace. What could be more apt.
We started small (ish) with a making evening. 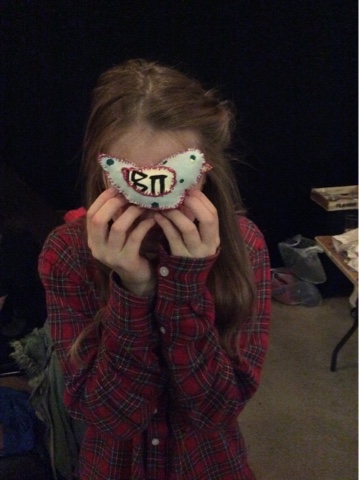 We were over whelmed by the response. 45 people came to make birds with us in late November to be sent with the children's clothing packs to Greece. 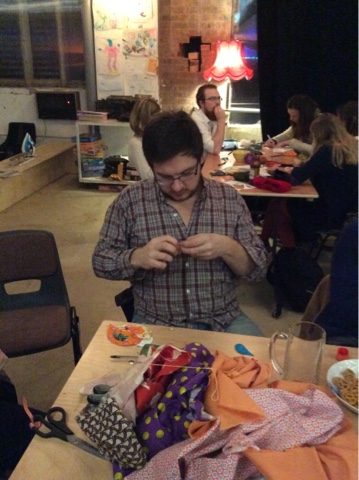 45 women and children and big beardy men, A group of Eritreans now living in Hastings came along to help via Links a local organisation working with asylum seekers in our area.
And every one was clamouring for more. 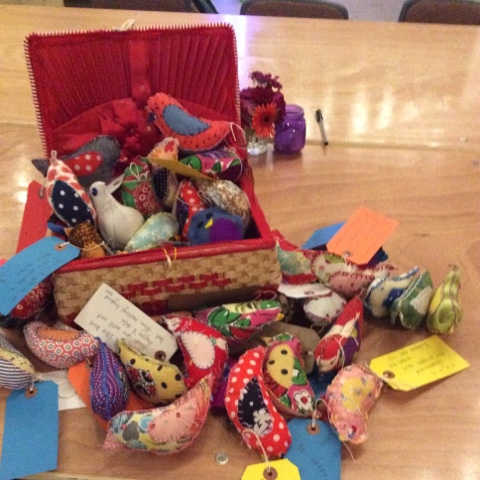 This was about to become sewing for the greater good on an enormous scale.
This tale is long and complicated, some of the major players in it haven't even been introduced yet.
So I am going to yet again leave you on the precipice of the cliff.
Next time I shall tell you how our little birds have taken flight.
If you are still with me thank you. It has been a wordy old post with few pictures.
Love Nora xxx
PS: The FB link to the refugee group will take you to our public page rather than the closed group.
Email Post
Labels: birds Every person matters refugees welcome sewing for the greater good sewing.