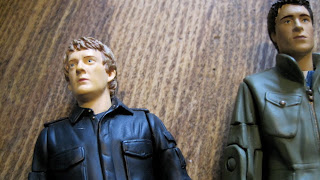 Cast your mind back, then back some more, rewind, rewind, rewind, faster, faster, faster,
keep going we are nearly there.
BANG!
The Late Jurassic is looming close at hand,
nearer, nearer, slowly now only the odd millennia to go...
BANG!
Welcome to the late Jurassic.
This is a little how my life has felt of late.
The Ginger Ninja and his friend Edan are currently obsessed with "Primeval".
So much so my number one son wishes to be renamed Connor Temple.
And so with their birthday (born in the same hospital on the same day 7 yrs. ago) looming we did a little time travel. 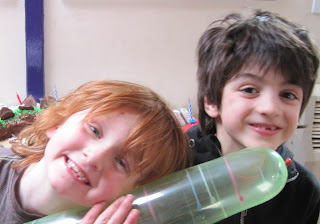 First came the dinosaur footprints.
So easy to make. I made a template for the flags and then cut them out from a roll of wallpaper lining paper, I did about 140. Then I cut a large baking potato in half and carved it in to a dinosaur foot print.
Quickly mixed up some poster paint and voila! Think it took under an hour to
print them all.
When the flags were all dry I punched holes in the top of them all with a standard two hole paper punch, then threaded them on lengths of wool.
I did some paper table cloths in the same way. 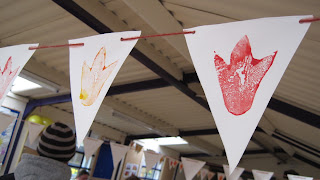 Lucy Edan's Mum slaved in to the very early hours of the night before creating this fantastic dinosaur meets the Daleks cake. 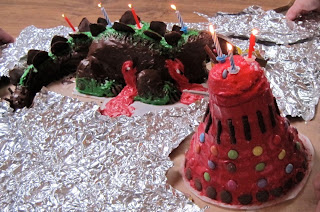 Myself, thats Nora, thats me, the Flaming Hippie and the blonde side kick
went as a family of ankylosaur's.
The costumes were surprisingly easy to make using only some scraps red fabric and a primark hoodie.
I think I feel a tutorial coming on!
Watch this space... 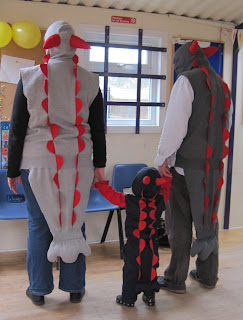 As ever there were some fantastic home made costumes.
Connor Temple his very own self. 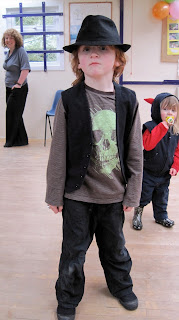 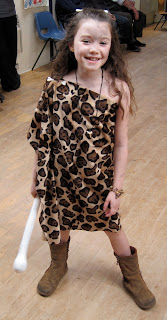 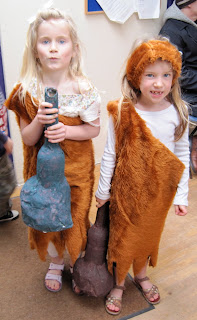 And of course a stegosaurus, there is always one.
Such a brilliant and easy idea, stapling cardboard spines down the back of a t-shirt. 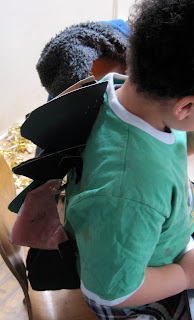 And then to top it all Connor was given this amazing book, hand made by our friend Mel. 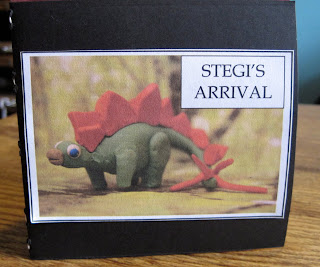 I was very flattered and to be honest flabbergasted when she claimed this little old blog was the inspiration for the book!
Yes ok I found it hard to swallow too, but apparently its true. 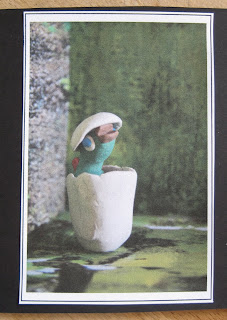 After seeing the Sock Monkey post Mel thought "I should do something creative, that looks like fun. But oh no, disaster, calamity I can't sew."
Next stop drawing, but that was a no go too.
But thankfully none of this deterred her, one quick trip to the toy store and a packet of plasticine later the magic began. 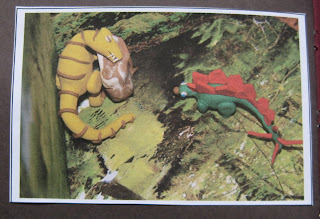 I really love the way she has made the Dipoldocus and Brachiosaur fall about in laughter, its so expressive makes me smile every time I look at it.
This picture also shows the way she has bound the book with linen thread. 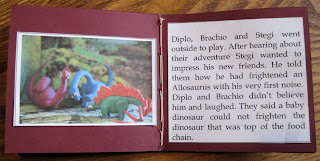