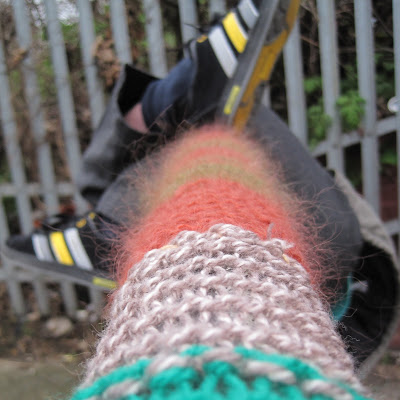 "BUT WHEN IT GETS SUNNY THEY WILL GET
ALL SWEATY INNIT?"
Someone was walking to the station the other morning and found a group of teenage girls clustered round the Ninja Knitting at the entrance to the tunnels of death, aka stab alley, stroking the wooly cozys and saying the above.
Ever since the Ninja Knitters were abroad a couple of weeks ago
we have had a slightly weird time.
There has been so much interest, with on line articles in a couple of local blogs,
people stopping us in the street asking about it,
loads of people want to become Ninjas and
every one really wants to know what we will be up to next.
But that my friends is not just TOP SECRET information.
It is ULTRA TOP SECRET INFORMATION.
Given out only to those who have been initiated in to the ranks of Ninja, with instruction to memorise the information, then burn the evidence and scatter the ashes to the four winds.
Any one who blabs in is deep do do.
They will have their tongues cut out and be fed the liquidized remains.
Very serious stuff this Ninja knitting!
At this point I must pause in my waffle to say that the Ninja knitters fame is spreading, not only because we did something funny, interesting and colourful at the very dreary part of the year, but because one of the Ninja's made the
most fantastic film.
If you haven't watched it yet, I urge you to do so.
Ninja Cristina is a clever girl and has made quite a few local films, though probably none as funny as this one. Or as well viewed so far the film has had over 700 views on You Tube.
All this activity does seem to have sparked a knitted graffiti turf war,
which is rather exciting. 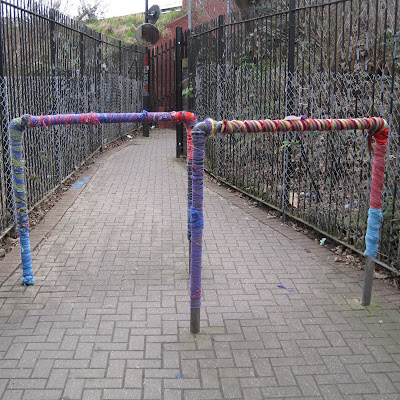 The serendipitous stitchers have taken over the other side of the tracks and decorated it with their own style of wooly embellishment. 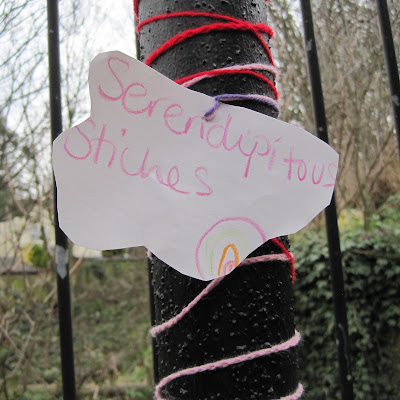 And from the sheer volume of finger knitting used I think it is safe to say at least one of them has a little girl or two hidden away at home!
I am secretly rather excited about two things, first that I think we have managed to convert one of the serendipitous stitchers over to the true path and secondly at the idea of some kind of knitted tag war starting up.
And still the story doesn't end, we all woke up yesterday to find we had been "chalked". 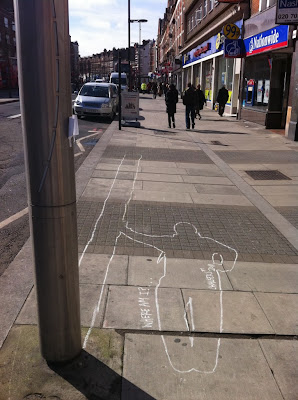 All around our area a group known as Chalkers had been at work under cover of darkness chalking the outlines of shadows cast by the street lights. 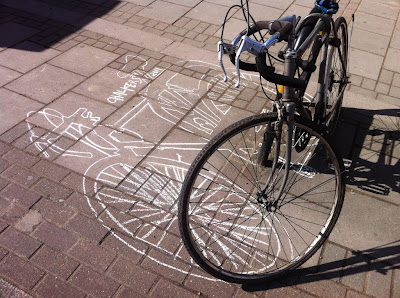 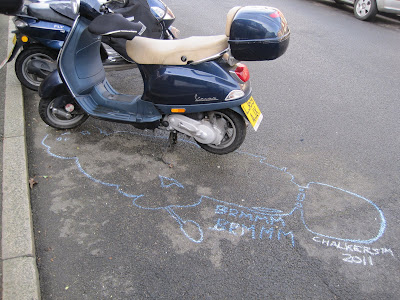 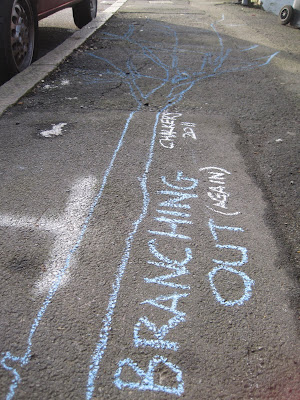 I have a feeling I know who they are as I had a special message round my chalked car.
In fact at the risk of sounding boring, I think one of them has been recruited to be a Ninja! 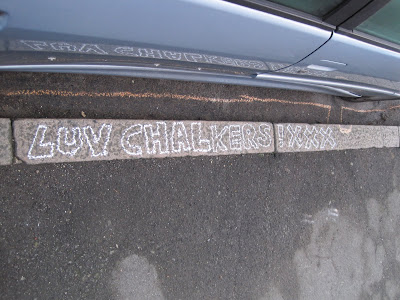 I am feeling if any one out there wants to join in the Ninja knit in let me know and induction in to the ranks of Ninjadom can begin.
Happy street art.
Love Nora xx
Email Post
Labels: chalkers graffiti ninja knitting