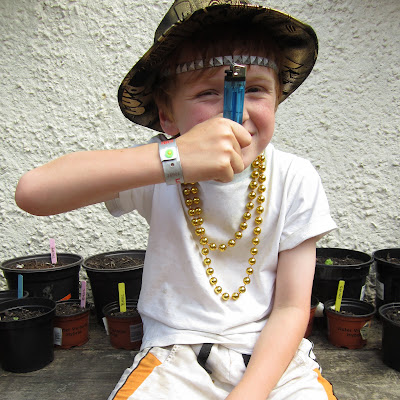 My big little man came home the other day.
He had been to the Cambridge Folk Festival with his Dad.
He left as a clean well adjusted child with a slight (ahem, strong)
South London accent,
and returned to the welcoming arms of his mother looking like a very grubby new member of Goldie looking chain.
Returning from a folk festival as a prototype bearded, real ale drinking,
tyedyed t-shirted hippy would make sense.
But not my boy.
In Fact this Photo does not do justice to the new look,
somehow a lot of the dirt has been magically removed from his beautiful white outfit.
WHITE! I ask you, who would put a child in white?
especially a child at a festival?
You also can not see a. the true magnificence of the hat,
or b. the fact that his hair is dyed blue.
He was very proud of his lighter.
I thought "oh its just an old empty one that he's picked up."
I am hoping not to be proven wrong.
But I am expecting the opposite.
Off now to tackle the K2 of washing they brought back with them.
Love Nora xx
Email Post
Labels: family life